Abuses of the Department of Justice by Congress 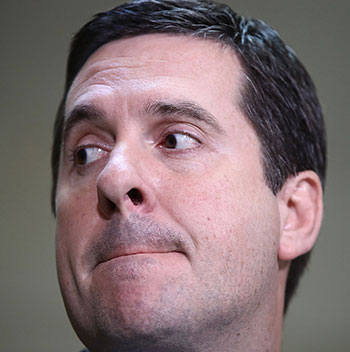 So, the memo was released. I read it. I’ve not heard any news about it today yet, but I sure heard all the hype ahead of time that Republicans and Fox “News” have been spewing. I was concerned that it would be so much cherry-picked information and half-truth nuggets about the FISA warrant process in general and Carter Page in particular, with so many key omissions and maybe some outright BS added in for fun, that the lemmings that watch Fox “News” and listen to Alex Jones would be so convinced of a nefarious “deep state” oppression of poor, poor Donald Trump that it would spread to mainstream media outlets and actually gain traction with the public.

It still might; I mean, Americans can be pretty damn stupid. Trump’s approval ratings actually went up after his apocalyptic State of the Union speech that announced zero policy or agenda items and stoked fear of immigrants with bullshit about how brown people are coming to kill your children.

But the memo itself? It ain’t all that. If one actually reads it fully—and, you know, knows words, the best words or even some words—it actually undermines the Trumpster brigade’s claims.

It’s also full of shit, of course, no doubt with the intention of confusing and distracting from the big picture by giving us other things to refute and argue about. Even if you allow the title—“Foreign Intelligence Surveillance Act Abuses at the Department of Justice and the Federal Bureau of Investigation,” which itself implies a conclusion not found—it chooses not to be subtle in propagandizing.

Referring in section 1) to the Steele Dossier as compiled “on behalf of the Democratic National Committee (DNC) and the Hillary Clinton campaign” omits the fact that before anyone associated with the DNC was involved it was started by and funded by the Washington Free Beacon on behalf of Republicans. It goes on to allege “political origins” of the dossier—which may be true, but those origins were not from the DNC or any Democrats—and claims that Christopher Steele was “working on behalf of—and paid by—the DNC and Clinton campaign,” which is utter bullshit.

It goes on in section 2) and 3) to attempt discreditation of Steele himself, alleging violations of protocol and suggesting that his “desperation” that Trump not become President was the source of, rather than result from, his findings while investigating Trump. Section 4) characterizes the dossier as known to be “salacious and unverified” (portions have since been verified) with the implication that those terms somehow mean “incorrect,” which they do not, and reiterates the suggestion that Steele fabricated his findings due to a pre-existing political agenda. Section 5) ties in the “scandal” of the Pete Strzok/Lisa Page text messages that were critical of Trump (the memo makes no mention of the fact that these messages were also critical of Clinton, Sanders, other Republicans, other Democrats, and evidenced no clear preference for any one person or candidate; nor does it mention that Strzok was removed from the investigation when these text were found, lest there be any appearance of bias), but to do so has to acknowledge that the investigation that the Carter Page FISA warrant was a part of actually originated with another Trump staffer, George Papadopoulos, in July 2016. The memo begins with stating that the issue at hand is the October 2016 FISA warrant, which is the date of a renewal of an already existing warrant to surveil Page.

The thing is, none of the bullshit matters.

In terms of factual, relevant information that shows an improper granting of a FISA warrant or other abuse of power, the memo has exactly zero content.

The origins of the Steele Dossier might have relevance if it were shown to be false, but to date nothing in it has been disproven and several items have been verified. Christopher Steele and his agenda are not the issue, the issue is whether or not Trump staffers (in this case Carter Page and Papadopoulos) are acting as agents of a hostile foreign government. Probable cause had to be shown at each renewal of the warrant, and the memo itself describes the Steele Dossier as “part of” the warrant application. This means that there was other evidence in addition to Steele’s findings that went to establishing probable cause. Nothing in the memo even suggests that any item within the dossier is inaccurate, it simply impugns the investigator. It also admits that at the time of the initial FISA warrant on Page that examination of the Steele Dossier was “in its infancy,” meaning it would not have had much bearing on whether or not to grant the warrant, and that even then it was “minimally corroborated,” meaning that what little they had examined had been corroborated.

Devin Nunes, probably with help from the White House, concocted this document for political reasons only, to attempt to paint Christopher Steele as a partisan who fabricated his dossier because of a hatred of Trump, rather than a concerned investigator who developed a fear of Trump because of what he found while compiling the dossier. It is supposed to be a document that shows “abuses” by the Foreign Intelligence Surveillance Court, but gives no evidence of any kind that the FISC issued a warrant improperly.

No careful reading of this memo can lead to conclusions other than motives of purely partisan obfuscation and distraction by someone with something to hide.