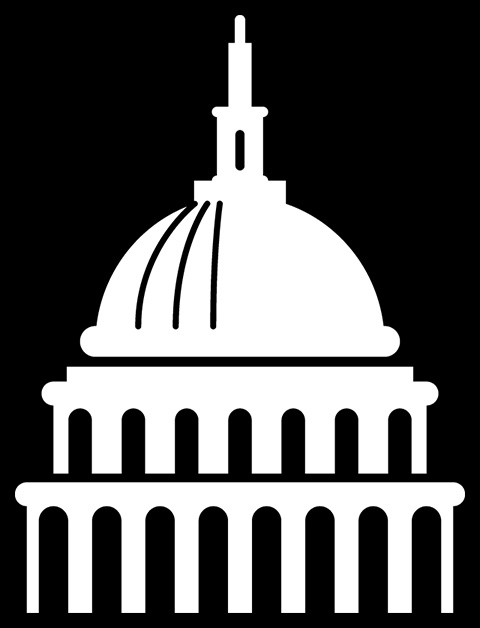 If it's Monday, it must be time for another letter to Congress.

That's the way it is here in Trumpistan—every day there's a new outrage. So, gotta make our voices heard, especially since I didn't participate in the airport demonstration or the downtown rally last night. I sent the same one to all three of my reps, and by all means, feel free to crib for your own letters to Congress (though if you do, don't copy me verbatim, if it starts to look like a form letter it'll have less credence).

Hi. Me again. I know, this is starting to become a ritual.

Today's plea regards the upcoming votes on cabinet nominees. Please, for the sake of all humanity, oppose with vigor the confirmations of Betsy DeVos, Jeff Sessions, Scott Pruitt, Tom Price, ... you know what? Every remaining Trump cabinet appointee is horrendous. They ALL need to be denied.

Perhaps more importantly, it has become crystal clear that the president is being controlled by Steve Bannon, a man no one elected to anything. This neo-Nazi is writing presidential executive orders and directing policy, taking advantage of Mr. Trump's obvious intellectual and psychological deficiencies to pursue an agenda of bigotry and mayhem. (He has said -- out loud! -- that his goal is to "destroy the state.") Steve Bannon needs to be denied as well. I don't know offhand what authority Congress can bring to bear on someone with a "White House adviser" title, but somehow, some way, he has to be removed from his position of influence.

The Trump Administration has been in power for just a week-and-a-half and the damage has been mind-boggling. Trump and Bannon's disregard for civil norms, policy procedure, legal review, and basic decency—not to mention the Constitution—must not be allowed to continue, lest the chaos of these last few days turn into complete and utter disaster in the next few months, let alone four years. And I haven't even mentioned the brazen, naked corruption happening with the president, his staff, and his cabinet nominees! The number of outrageous things this administration represents is almost infinite.

I'd say focus on the top of the food chain and "simply" impeach Mr. Trump, but I know the Speaker and most of his fellow House Republicans aren't likely to entertain that notion, at least not yet. So until that course becomes feasible, please: Give no quarter.

Oppose these horrid cabinet nominees. Find a way to remove Steve Bannon. Support the judiciary when Trump and his people break the law, as they did with the Muslim immigration ban (and let's not mice words, that's what it's intended to be).

Well, here we are. Day One of the Trumpocalypse. For two-and-a-half months we've been anticipating this day with anxiety of epic proportions. Just what are we in for now? And will we survive it?

One of the few amusing things about the election results is the general consensus of the nerdosphere on social media that the 45th president is basically Gul Dukat, the principal villain on Star Trek: Deep Space Nine. It is remarkably fitting; Dukat even made the claim that he was sending his people into the ruinous clutches of a hostile foreign power in order to "make Cardassia strong again" (he may as well have said "great"). Gul Dukat is a narcissistic, autocratic, brutal oppressor who fools people with smarmy charm, all the while believing fervently that he's the hero, and that true victory is not vanquishing your enemies but "to make your enemies see they were wrong to oppose you in the first place. To force them to acknowledge your greatness." He was even a cult leader for a time. There are at least ten Dukat Twitter accounts that conflate the Cardassian dictator with Mr. Trump. The best is Joe Sondow's @realRealDukat, that copies tweets from @realDonaldTrump with small edits to substitute Dukat for Trump and other DS9 terms for real-life ones:

Though Dukat was eventually deposed and his successor ultimately defected to the good guys, by the end the planet Cardassia Prime was war-ravaged and in utter ruins. May fact play out better than fiction.

The analogy isn't perfect—Gul Dukat is smart and has a knack for oratory, while Trump can't properly read or string together consecutive coherent sentences. But we'll call that artistic license.

With all this in mind, here's my latest sketchbook entry. 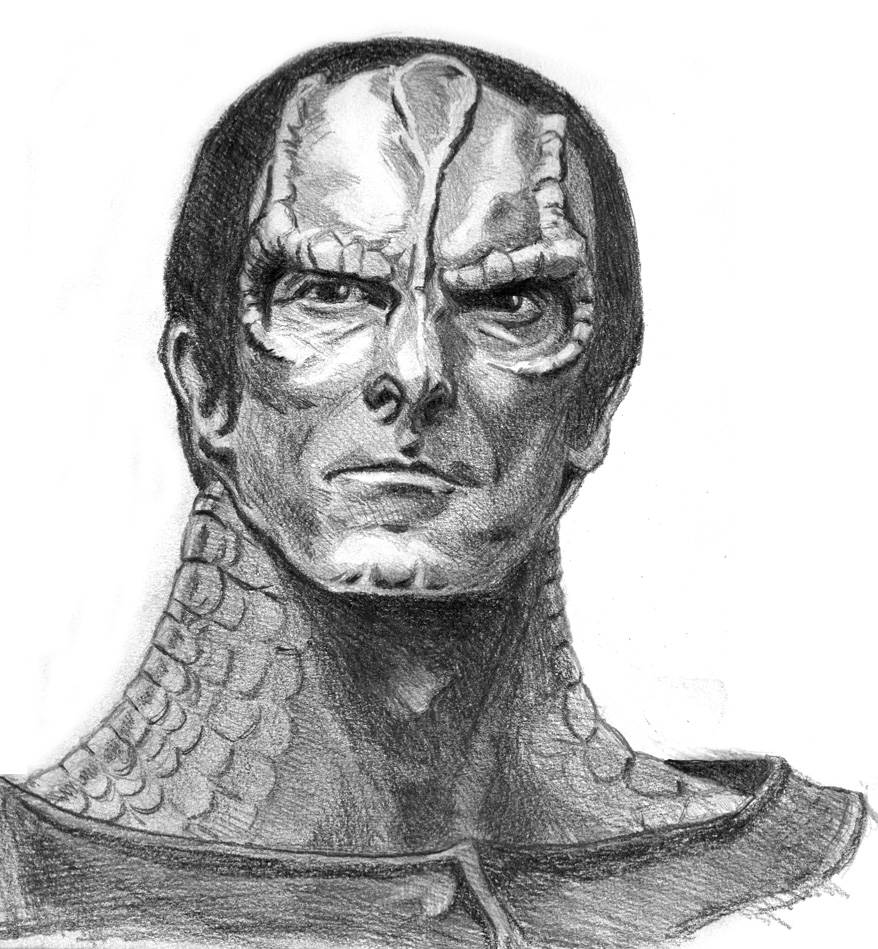 Since the election, I've written four letters to my congressional representatives. I'm quite sure there will be many more to follow, because the stakes have never been higher for our Republic. My prior letters urged opposition to Trump cabinet nominees and support of investigation of and appropriate action for the Russian attack on our election. This one is about the Affordable Care Act as it faces catastrophic maiming if not outright repeal by the Republican leadership.

I have added a link on the right sidebar (not visible if you're reading this on your phone, maybe if you tilt it over to landscape mode) under "Be Heard" that I invite everyone to take advantage of. It'll take you to to a site that will find your Senators and Representative based on your zip code, then give you a ready-to-go form that will send them email or, for a nominal fee, printed snail-mail letters. They don't have to be long, they don't have to be especially eloquent, they just need to convey your opinion on a particular issue. Take advantage of this tool! Write often! (And check out Indivisble as well for helpful pointers on what to say.)

Firstly, thank you for your advocacy and efforts thus far regarding public health matters in general and the Affordable Care Act in particular. The ACA has been a godsend to the American people, even those who haven't recognized it as such; I myself have returned to the ranks of the insured thanks in large part to the ACA.

The Republican goal of repealing the ACA is astonishing—or rather, it would be if the Republican party bore any resemblance to its former self—and I implore you to continue to oppose them in their efforts to strip us all of this newfound ability to get care.

What Congressional Republicans are trying to do would be criminal under broader context and should be stopped. Consequences of repealing the ACA without substituting any comparable alternative are predictbale, because we've seen them already. For the most fortunate Americans, they will be forced into lesser insurance coverage for more money. For the rest of us, it could mean the choice between financial ruin and death.

Paul Ryan, Mitch McConnell, Donald Trump, and their respective posses are either indifferent to the fact that their agenda will bankrupt and/or kill thousands of Americans, or they are deliberately planning it. That makes them, if they succeed, guilty of negligent homicide or premeditated murder, all so they can enact a kind of atavistic revenge fantasy against a soon-to-be-former President that they detest.

If there is a legitimate reason for the GOP's repeal effort outside of (a) empowering the insurance industry to make greater profits on the backs of Americas who can't afford it and (b) giving a giant middle-finger salute to President Obama, I don't see it. It certainly has no basis in serving the interests of the American people.

Keep up the good work, and please—remind your Republican colleagues that they are supposed to be PUBLIC SERVANTS, not officious-looking hit-men.

Congratulations. If you're reading this, you've survived the unwelcome boil and ambitious killing spree that was 2016. I know, I know, it wasn't all bad; it only seems like it thanks to the plethora of public-figure and closer-to-home death and the election of a narcissistic marshmallow turd. But there were moments of good here and there sprinkled among the nightmares.

But all that's over now and it's time to engage in that cultural ritual of promising to be better at X, Y, and Z—the "New Year's Resolution"—and to show off our awesome precognitive powers and predict events of the coming Solar orbit, knowing full well that we will most likely not succeed in either resolving or predicting.

I've already blown one semi-resolution, which was to avoid "lost days" in 2017. I know revise the goal to be "keep lost days to less than 5%." A "lost day" is a manifestation of the screwed-up brain chemistry that prompts me to be gloomy and lethargic and generally wallowy (better known as clinical depression and colloquially referred to in these parts as The Black Hole), one that results in literally staying in bed all day rather than get up and engage in some facet of actual life. I've had a number of these lost days in the weeks since the election, both for the macro reasons of the impending Trumpification of America and micro reasons of personal discontent (of course, ascribing reasons to them so casually is a gross oversimplification, but I think one has to be "one of us" to really get that). Once in a while I suppose they can be helpful in riding out a Black Hole episode, but they can also be self-feeding parasites if too frequent.

Other goals for the year may include:

As for my powers of prognostication, let's see...

I'm afraid to make more political prognostications except to say it's gonna be a shitstorm full of lawsuits, corruption charges, and diplomatic damage-control.

How about everyone else? Goals? Predictions?