In late 1985, when I was 16, things at my school were a little bit space-happy because the principal, Sr. Judy (yes, my school was run by nuns, though they were rather unconventional nuns), had applied to and was a finalist for the teacher-in-space project. She had a shot at being on the January '86 space-shuttle flight (she would ultimately lose out to Christa McAuliffe). So it became a thing, lots of NASA-based stuff being taught and a mock space shuttle was built for students to go on "missions," which would parallel actual shuttle missions and approximate some of the astronauts' experiments and other educational goodness as well as give the experience of living in a confined space for days, just like the astronauts—except for the pesky gravity, which kind of ruined a lot of the approximation stuff, but still it was a great thing.

I, however, was in some ways already living in the future, being a sci-fi nerd and Star Trek expert, and was even teaching a course on Star Trek to my fellow high-schoolers (based on a college course I read about that tackled philosophical and scientific questions and issues presented in the episodes). Space shuttles were old hat. Primitive, even. Wake me when there's warp drive.

So, on the morning of January 28, 1986, while most of the school was gathered around a TV and a "crew" was in the mock space shuttle, monitoring the launch of STS-51L, I wasn't with them. I was in a smaller room, with a group of a dozen or so others, introducing Episode 5, "The Enemy Within," ready to engage in a discussion on the makeup of personality, whether traits are inherently "good" or "evil," and whether one needs the unpleasant elements of humanity to be a functioning whole person.

Just as the transporter malfunctioned and split Captain Kirk into two people, someone burst into the room and said "the shuttle blew up."

It was a stark reminder that this old-hat, primitive stuff was still, in our real world of the 1980s, the frontier.

We abandoned the Enterprise for the day and I spent the next several hours doing what I could to improve the TV reception and follow along while the school debated whether or not to continue the mock shuttle mission (they did) and ponder Sr. Judy's good fortune at not being chosen for Teacher in Space. Also figuring out what O-rings were and trying to fathom why we depend on such fragile materials for things like a spacecraft.

Anyway, Challenger is in some ways my generation's "where were you when Kennedy was shot" moment; it arguably stalled NASA and set back space exploration for years, and remains a potent moment in personal history.

So. Here's to the crew of STS-51L. May we keep on exploring and advancing, and risking, out into the big black, boldly going where humans have yet to go.

So, the "President"'s doctor says Trump's cognitive ability is fine and there's no reason to believe he's suffering any kind of decline or dementia.

I have no trouble believing that.

As much as it might be in some weird way comforting to think that President VonClownstick is a demented old man and that's why he says and does the horrible things he says and does, there's no reason to think so. It'd be one thing if there had been an observed change in his behavior, but aside from Michael Wolff's observation in the Fire and Fury book that he's taken to repeating himself more often than he had been previously, I don't know of any. He's been this same sort of racist blowhard misogynist ignoramus moron the whole time he's been a public figure. Presumably before that, too.

He's completely compos mentis. He may be (and is) a narcissistic, vain, incredibly insecure egomaniac; he might be (and is) a bigoted, mean, willfully ignorant sociopath; he may be (and is) a weak-willed, greedy, and fundamentally cruel fool whose lack of intellect and dearth of knowledge makes him an easily-manipulated danger to all of humanity; but he's perfectly sane.

What I do have some trouble believing is that the man weighs only 236 pounds. That rings about as true as the back of Terry Forster's baseball card.

The avalanche of crap coming from the White House has been impossible to keep up with. There's just too much. Every day brings news of a new outrage from President VonClownstick or one of his toadies. If it's not the "shocking" racist statement about immigrants form "shithole countries" (this shocks no one who has been paying attention, that's who this idiot is), it's the neverending stream of lies coming from Sarah Huckabee Sanders' press briefings or tweets that parrot Fox News and cause national security officials to go into frenzied damage-control spasms. And that's just the "big" stuff.

Rachel Maddow did an exceptional "A" block the other evening that pretty well covered my feelings on the subject; there is just SO MUCH in terms of outrageous behavior, bad policy, overt meanness, and basic incompetence and stupidity coming out of 1600 Penn. that we're numb to it. It takes the exceptionally salacious or brutal to be given its proper reaction and attention, otherwise it's just Trump being Trump and so much yadda yadda yadda.

We humans only have so much bandwidth to devote to keeping up with the details of this crisis in history, but even if we don't pay strict attention to the yadda yadda of it, we have to remember that's what it is. Life keeps on chugging forward day by day, but we are living through a pivotal period in history that demands attention—as much as we can bring ourselves to give it, anyway. 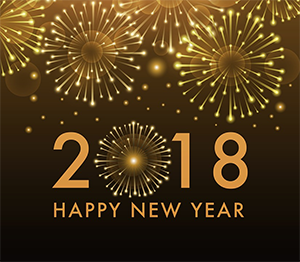 I don't generally do well with the whole New Years resolution thing. Like a lot of people, if I make any at all, they tend to get followed for a few days or weeks and then fall by the wayside. Last year I made some; nearly all of them didn't take. (I did make the cabinets, though. This year I need to make some more, slightly different ones.)

This orbit, my thoughts are similar to last—fear and trepidation from the Trumpster fire at 1600 Penn., anxiety and impatience about my housing situation, dissatisfaction with personal stuff—and I could almost copy and paste last year's post here without much tweaking and it'd be just as appropriate to the moment.

But let's go through the exercise, just for the hell of it. So, Things I Would Like to Do Going Forward in This the Year 2018:

The larger macro picture of the world promises to be plenty interesting, of course, and here's hoping we all survive it. Everyone—at least, ever American—make sure your voter registration is up to date and be ready to fight when the corrupt Republican party tries to rig another set of elections.