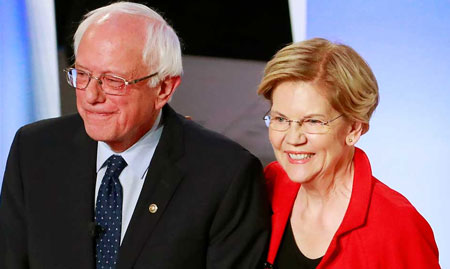 Three, count 'em, three states have held nominating procedures for the Democratic race for President. Two of those were caucuses, and the one that was a primary was effectively an open primary—very, very few people have yet had their say and New Hampshire allowed crossover voting. So of course this is the perfect time for everyone to FREAK THE FRAK OUT because Bernie Sanders is in the lead with 45 delegates. 1,991 are needed for nomination.

It's the nature of the system that early contests have ridiculous influence over the whole process. It's basically insane that this is the stage that could really truly determine who's viable and who isn't, but for now, anyway, it's the reality we live in. And the conventional wisdom among the punditry, for what that's worth, seems to be that there are too many candidates still standing to avoid a Bernie Sanders nomination through non-majority plurality.

I don't know if I buy the details of that conventional wisdom, but the broad strokes are troubling to me. Under normal circumstances it might just be a curiosity or a mild irritant, but circumstances are so far from normal I find I am very close to joining the freakout.

Don't get me wrong, I like Bernie Sanders when it comes to policy, in large part. Not entirely, but in large part. But I fear him as a general election candidate. That might be unfair, that might not stand up to thorough examination, but it's still there. I do not want him to be our nominee for a number of reasons, chief of which is that I am afraid the Republican propaganda machine will succeed in opposing him in a way it would not in opposing the other candidates. The Trumpers will paint him as a very different kind of socialist than he actually is and in too may people, it will stick. His failures to support sanctions on Russia are curious and those will be weaponized (incongruously, but still). His lack of specificity on how to finance his grand visions will be used to tar him as a fantasist (again without acknowledging the rank hypocrisy of it). His sort of unpleasant grumpy personality could work against him too. His health is in question and he's being a bit too secretive about it.

On the other hand, Sanders is energizing a voting bloc that we need—younger voters, a group that historically has been apathetic. Pro-Bernie advocates have argued that those new voters will (a) not support anyone else, and (b) will outnumber any groups that defect. Maybe.

I just don't want to risk it. Elizabeth Warren is my candidate of choice, as I've said before; I think she's a far, far better candidate not just in terms of policy but in terms of inclusiveness and attitude and ability to actually make progress, and she should be as attractive to those young voters as Sanders is (if they were to pay attention, which is far from certain). I know a couple of people that fear her as the nominee because of sexism (not theirs, but their perception of the electorate), but I think she's on pretty solid footing there. She's tough in a way that doesn't offend (at least, doesn't offend people that don't oppress other people) and she has more chops when it comes to fighting corruption—which, aside from preventing tyranny, should be either the number one or number two issue in this election, along with climate change—than anyone else by a long shot. Joe Biden is a troubling candidate because of how he presents himself and a kind of out-of-touchness he seems to embody, but I'd be fine with him, I think he could cut it. Klobuchar isn't a viable option, but I'd be OK with her too, if not super jazzed. Mayor Pete is evidently a super-smart guy, but I want him to get some more experience before jumping all the way from mayor of a modest city to president; still, I'm OK with him too. None of them seem nearly as risky as Sanders in the general, and all of them would probably have more success after becoming president.

Even if he were to win, I don't see Bernie getting very much accomplished. He has fine goals, but getting them done will take a lot of work and he's short on allies in Congress. He still won't join the Democratic party. He would have to become a Democrat by requirement if he were to win as the party's nominee, but he's stubbornly refused so far, which isn't exactly a problem but also seems a bit...off-putting? To congressional leadership, I mean (mostly). Again, Warren seems like a much better choice for making actual progress. Much better. Many of these younger Bernie devotees could end up jaded and disillusioned if he wins and doesn't get Medicare for All and free college passed into law in four years.

But in the grand scheme of things, I'd be happy to have to address that problem—right now the crisis is getting this tyrant out of the White House and restoring democracy and the rule of law to this country.

Bloomberg can go to hell, he's probably the worst guy we could put up. But Sanders makes me nervous and I don't want to nominate him either.