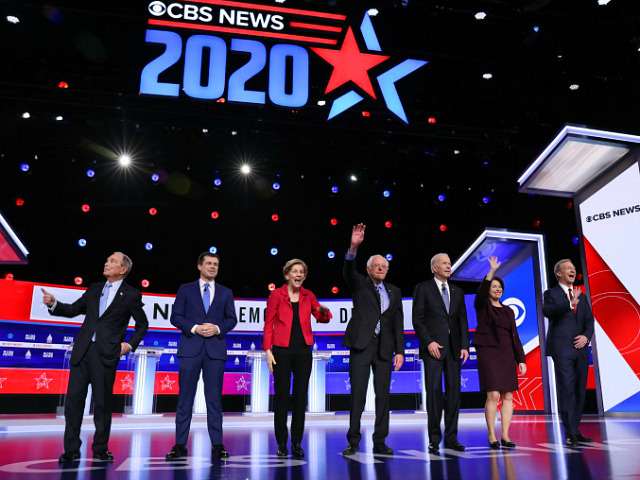 Well, that was embarrassing.

The latest (and last before Super Tuesday) debate in the Democratic primary campaign ended a little while ago and the most charitable thing I can say about it is that it was a mess. Candidates talking over each other, petty sniping, perhaps the worst moderator performance yet. That last is really saying something—the questions in these debates have been pretty lame, but these people, who in their day jobs aren't all that bad, were astonishingly ineffective and ass-backwards with their priorities. At least Chuck Todd wasn't involved.

Some good moments in terms of candidate answers/comments, which I'll note below, but they were ignored by moderators who allowed and even engineered pivots to nonsense and shouting. Unlike the last couple of debates, I watched this one solo and followed my Twitter feed in more-or-less real time; some solid commentary:

Dear Debate Organizers,
Perhaps you might consider having an educator moderate future debates. We have extensive experience in calling on people to speak, and not allowing others to interrupt.
Just a thought.
Sincerely,
A Kindergarten Teacher#DemDebate2020

CBS: call the bullpen, get the emergency moderator warmed up.

This is a human xylophone that’s gone out of tune.#DemDebate2020

CBS screwed the pooch so badly. From dumb questions that completely ignored the most pressing issues of the day to complete lack of control over the crosstalk to steamrolling through and past the most pertinent things said by the candidates, CBS handled this in such an unprofessional manner that they should be suspended for four years from hosting national debates. And, the cherry on top, they ran at least two Bloomberg ads during the breaks. What. The. Frak.

It called to mind my feelings when CBS had the broadcast rights for Major League Baseball in the ’90s. They instituted a playoff schedule that didn't allow fans to watch games out of their immediate market and saddled us with some of the worst sportscasters of the day (looking at you, Musberger). We missed NBC and Scully and Costas so much. (Still do, since when CBS lost the rights they went to Fox. Not worse, but not much better.)

But unlike sports, a Presidential election is hugely consequential and deserves, you know, actual journalism and substantive conversation rather than reality-show bear-poking and inane repetitive dumbed-down-agenda-setting. Truly pathetic, punctuated by a last-question round more suitable for a campaign for prom king/queen and then a gratuitous commercial break to run, among others, yet another fucking Bloomberg ad.

When there was good substance, it came from Joe Biden, Elizabeth Warren, and a little from Tom Steyer. Pete Buttigieg had a couple of good answers as well, but hurt himself with some too.

Pete scored with some acknowledgment of his white privilege and recognition that neither he nor anyone else still running has the experience of being black/brown in America, as well as getting a good shot in against Bernie Sanders' support for keeping the filibuster rule—"How are we going to deliver a revolution if you won’t even support a rule change?"—but also warned that a Sanders nomination would beget "a scenario where it comes down to Donald Trump with his nostalgia for the social order of the ’50s and Bernie Sanders with a nostalgia for the revolution politics of the ’60s," denigrating a 1960s period in politics that resulted in, among other things, the Civil Rights Act, Medicare, "The Great Society," the women's lib movement, et.al, things that are very much tied to Democratic staple values. Not only will this not appeal to Sanders' supporters—a ’60s-style uprising is the point to a lot of them—it may well alienate rank-and-file Dems to diminish what came from that time of tumult.

Warren once more shivved Bloomberg for his past treatment of women and history of funding Republicans, which was welcome. She also made a strong case for public education and its importance, addressed foreign policy issues like military intervention and Middle-East conflicts with thoughtful substance and diplomatic aplomb, and most importantly made her case for being the true progressive choice by (a) pointing out that her "progressive" proposals are popular among Democrats and largely mainstream, and (b) showing her knowledge of the system and how to navigate it, something Sanders simply has not shown an ability to do. Part of that is her insistence that the Senate must do away with the filibuster, a goal Sanders opposes, as necessary to overcome Republican intransigence. I'm ambivalent about removing that tool from the box, but it has been abused so broadly and routinely by Mitch McConnel and company that I agree in principle. (I'd prefer an adjustment to the rule that returns it to the "Mr. Smith Goes to Washington" style filibuster that requires a Senator hold the floor indefinitely; still plenty of opportunity for abuse there, though, so I might be convinced even that has to go.)

Biden went to his tired routine of claiming he's the only one running who'd ever accomplished anything, which is, frankly, annoying, but he also looked strong and more together than he has in prior debates. When discussing gun violence (nice to see that brought up, by the way), he called out the NRA, which was great, while also sticking it to Sanders for his previous support of gun-lobby positions (positions which, to his credit, Sanders now admits were wrong). He also showed some foreign policy chops when hammering the Trump Administration for its myriad failures.

Steyer is essentially irrelevant at this point, but he's polling high enough in South Carolina that he took a little bit of heat and occasionally made a nice point on something like climate change that was then steamrolled by crosstalk or moderator dismissiveness.

Sanders took a lot of pounding and probably came out much as he went in, support-wise. The criticisms of his recent comments about Cuba and his fast-and-loose approach to details on his big visions really didn't land in terms of peeling support away from him. It may end up factoring into whether he gains support from anyone else's bloc when others eventually drop out, though. Bloomberg at least twice invoked 9/11 as if he were trying to be Rudy Giuliani, plus he tried to be funny and charming and failed miserably. Klobuchar didn't move her needle either way.

Best lines that may or may not end up making the rounds:

These moderators might be the weakest moderators I've seen in a debate.

They have absolutely no control over who is speaking and they are forcing candidates to steamroll them if they want any speaking time.

This is a trainwreck.

The words you live by? Is this a fucking yearbook page?

Maybe CBS’s plan here is to run a debate so poorly, all the candidates on stage at least look more competent than CBS

If so, mission accomplished

She’s right about everything except the plans being idiotic.

I’m going to take the over on 17 also. https://t.co/eYJMcKTUTk

We heard about personal mottos at #DemDebate.

We didn't hear about climate change at #DemDebate.

We seriously must do better.

Elizabeth Warren knows that the military should not be used a cudgel against problems that can be solved with rational adults talking to each other and getting things done with diplomacy.

Donald Trump disarmed our ability to deal with a pandemic and is lying about it to try to calm markets. Can moderators maybe ask about that?

If you boo or cheer at a debate you should get thrown out immediately. This is not about you and you’re wasting everyone’s time

That nobody spun from the closing of rural hospitals to the denial of Medicare for all to John Fcking Roberts’s sabotage of the ACA was disappointing.

You will not find the words “naked cowboy” in the transcript of any previous presidential debate.

This is a disgrace

You call this democracy?

And I thought the CNN debate sucked.

← Previous: Bernie Freak Out!!!!! / Next: The Anti-Trump and Stephen Colbert →