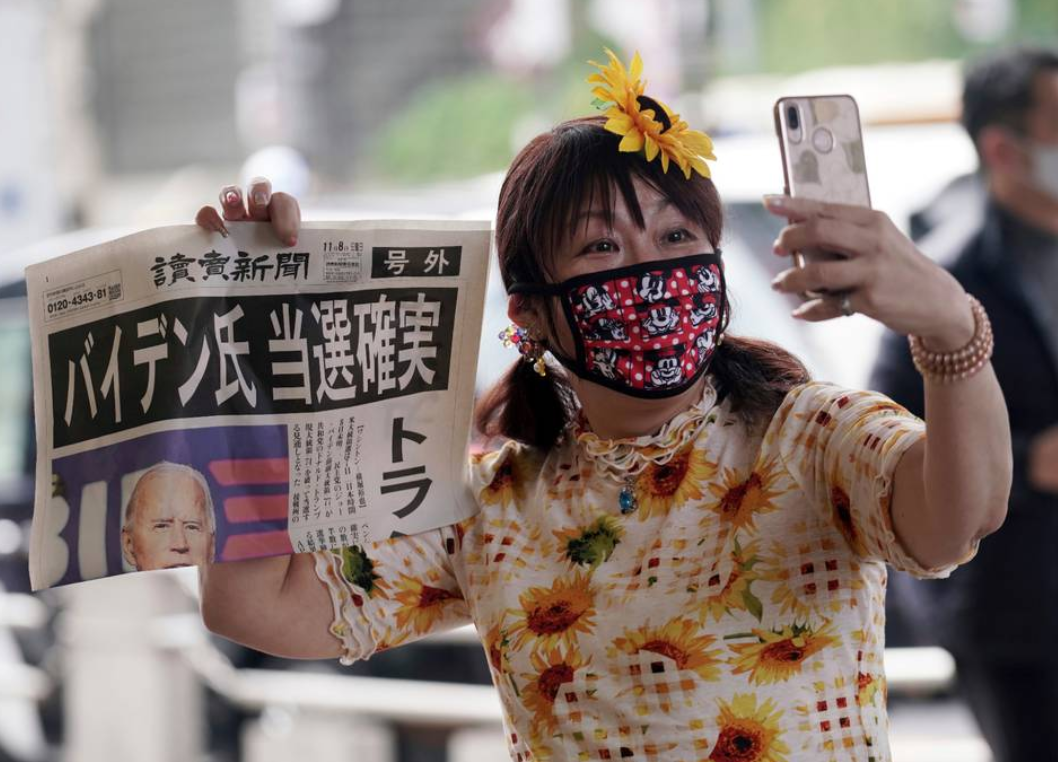 The world rejoices, including this woman in Japan

That's my top-line reaction to Election 2020: Stepping Back From Tyranny, the sequel that blew the pants off its progenitor, Election 2016: Racism is Back and it Brought Misogyny Along for Laughs. Composing a post to articulate my feelings from this week has been a challenge, because those feelings run the gamut. But relief, yeah. That's the biggest thing.

Going into Tuesday, I had convinced myself that I wasn't all that worried. Clearly, the Joe Biden/Kamala Harris ticket was going to win, there was no possible way President VonClownstick had enough people in his basket of deplorables to match the rest of us, not after the 63 million people that voted for him last time saw how he actually performed for nearly a full presidential term. Sure, he and his corrupt minions were going to try every bit of ratfuckery that they could think of to suppress the vote and cheat their way to "victory," but, I told myself, we had the numbers. We would turn out a record-breaking tsunami of votes that would prove more than enough to counter the cheating.

In the end, I may have been right about the result, but I wasn't right about my confidence. I was lying to myself—I was worried. And it manifested as a knot in my guts Tuesday evening and really kicked into high gear when things were still too close to call Wednesday morning. The bastard was actually getting more votes than last time. Millions more.

It was dumbfounding. The logical portion of my brain was calm, I knew that circumstances remained favorable and that because of the pandemic the Republicans' favored methods of committing election fraud would be largely neutered. But my emotional condition was fraught. Like, I'm sure, many others around the country and around the world (and perhaps even some extraterrestrial observers, who knows), I found myself in a kind of stasis, continually either watching TV news coverage or reading Twitter feeds, needing to see updated results. (I call it Kornacki Syndrome.) It was exhausting, but I wasn't really aware how much so. By the time Saturday morning rolled around, I had gotten, I don't know, maybe eight or ten hours of sleep over the roughly four-day period, snatched in bits of two hours at a time and lightly enough that I was never far from waking up to check Twitter again. When all the press outlets called Pennsylvania and Nevada, confirming a Biden victory, it was like a string was cut. The tension relaxed and I fell asleep, deeply enough to have weird dreams and keep me out of commission for the entire rest of Saturday. Except for a brief interregnum to feed the cats, who had awoken me with unsubtle demands, I slept from around 9 in the morning until 2:30am.

The sleep was refreshing. I'm able to put my mind off the news. I read fiction most of the day and was able to be completely immersed in the book. The grip of anxiety that has been a constant companion for four years isn't gone—we've still got 73 days until Joe and Kamala take over, and you know it's going to be a rough transition—but it's vastly improved.

But there's more, too. The flood of feelings includes several distinct emotive states.

Pride in the passion displayed by so many of the 75 million voters that got us here. A kind of relish in the success of efforts like that of fairfight.com to combat voter suppression and turn out people who historically haven't really participated. Glee in the utter foolishness of the Trump campaign's attempts at lawsuits to throw out votes. Even a kind of patriotic satisfaction in the power of an engaged electorate to overcome the forces of propaganda and fascism. Hope for a reform that will come with not only Biden and Harris leading the way, but with a score or more of outstanding congresspeople, including my own representative Pramila Jayapal, newly-elected Mark Kelley, Adam Schiff, and Val Demmings pushing for a better future.

On the flip side, though, there's fear. Fear of the more volatile cohort in Trump's fanbase, who will not take this well. Fear for the future, as 70 million Americans have shown themselves to be perfectly OK with authoritarian rule. Confusion about those Americans, a large portion of whom are almost certainly not evil but brainwashed; how does that happen, can they be reached, are they too far gone? Are they able to come to the realization that they've been conned, or are they too damaged? (Of course, a not-insignificant percentage of them know exactly what they were doing and are ruled by some combination of greed and hate and self-loathing, be they the likes of Mortimer Duke or George Zimmerman, and I've long accepted that we'll never be fully rid of them.) Outrage and disgust that there are pockets of this country that simply refuse to evolve; Americans this week reelected or elected for the first time some truly horrible people to both houses of Congress—Mitch McConnell, an evil man with no redeeming qualities, was handily reelected by the citizens of Kentucky; Lindsey Graham, an obsequious toady that is clearly being blackmailed, easily regained his seat; Devin Nunes, a Russian asset, is returning to the House. Louie Gohmert, Jim Jordan, Matt Gaetz, Cathy McMorris-Rodgers, Joni Ernst, James Inhofe, and Darrell Issa—all terrible people—were all reelected.

We've done the most important thing. We've ousted Trump and given the United States the opportunity to fortify itself against potential future autocratic leaders. But there's a long way to go to bring this country into a worthy future, and parts of it may have to be dragged along kicking and screaming.

But for now, relief.

I just watched John Oliver's show from tonight and, naturally, he makes some of these points a lot better than I. Please to enjoy.

← Previous: May We Live in Interesting Times / Next: Double Standards →