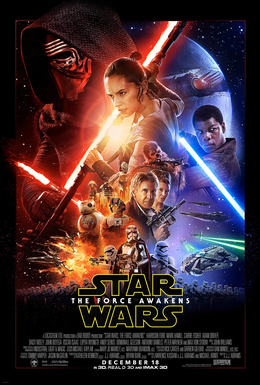 When it was announced that J.J. Abrams would be taking the reins on the new Star Wars film, I thought, “well, he might do right by it.” He had already treated Star Trek as if it were Star Wars, was clearly more aligned with the latter’s sensibilities, so maybe he’d turn out something great. On the other hand, maybe it would be, you know, just another J.J. Abrams special — an action film that doesn’t slow down enough for the viewer to have a chance to realize how bad the writing is.

Devin Faraci sums up The Force Awakens in pretty much the way I would: fun, worth seeing, just so long as you don’t think about it very much, lest it start to annoy you.

The Force Awakens is completely and totally a JJ Abrams movie, with all that entails, good and bad. Abrams is, for me, a frustrating filmmaker because he has an eye that is strong, a knack for casting that might be unparalleled, and an ability to pace his movies at a rate that sweeps you along faster than you can notice the narrative chasms that he’s leaping. All of these elements are on display in The Force Awakens, a movie that shamelessly panders to nostalgia while also charting an extraordinary future for the franchise, a movie that is great fun but whose sequences are held together by outrageous coincidence or through a complete disregard for narrative connective tissue. The film it most resembles, in the largest sense, is 2009’s Star Trek, a film with a killer cast having a great time in the middle of a stumbling, sometimes moronic story. Like Star Trek 2009, The Force Awakens exists best in the moment when you’re watching it, and is not well served by any sort of deep thought or analysis or consideration.

Devin is on the money about the casting; as with Abrams’ Star Trek, the acting company is top-notch and delivers way above and beyond the material its given. Devin’s full review is here, on a site that has annoying ad scripts that freeze Firefox every now and then. He has more to say and it’s a worthwhile review.

But few reviews that I’ve run across share my biggest criticism of The Force Awakens, which is not the bad science (Star Wars has always been firmly entrenched in the realm of Fantasy, not Science-Fiction, so the idiotic sun-powered cannon that somehow fires bolts that traverse star systems at hyperlight speeds and then inexplicably is able to fire a second time even though it drains a sun to fire the first shot is more or less OK), but this: Apparently the rousing success of Episodes IV through VI, overthrowing the tyranny of the Galactic Empire and freeing the populace from oppression, was a mirage. The good guys are again a “resistance,” taking on the more powerful “First Order” that seems to go anywhere it wants with impunity, and our heroine is living as a scavenger on an impoverished planet even worse off than Luke Skywalker was on Tatooine. One imagines that maybe a couple of years following Episode VI, Force-ghost Obi-Wan and Force-ghost Yoda look at each other and shrug, saying, “Oh well, they tried. Shall we play a little gin rummy before all life is destroyed?”

There is no Sith, at least, and the baddest villain here is a petulant teenager(?) obsessed with being a more evil Darth Vader than Darth Vader was, but this First Order sure has a ton of resources. That they get, I presume, by plundering planets that the New Republic was supposed to be protecting but didn’t during all these years, because, well, poor planning, I guess. Kind of like “liberating” Iraq: the despot is gone, but what takes his place? “Oh, we didn’t plan that far ahead. Maybe the Ewoks can govern the universe.”

In its favor, The Force Awakens has fun characters that are well-cast, is a good thrill-ride, and does “feel” like a Star Wars film in a way that none of the prequels did. But it has little to nothing in the way of originality (the parallels to the first Star Wars are too numerous to mention), sets the larger story backward rather than moving it forward, and basically craps on the heroes we grew up with by showing them to be total failures in the grand scheme of things. Luke Skywalker in particular has apparently learned nothing, as for the entire picture he’s in hiding, having run away and sulked after his attempt to teach a new generation of Jedi Knights went sideways. He’s still pouting like when his aunt and uncle wouldn’t let him to go to Toshi Station.

Still, I enjoyed it. I’ll see it again, even.