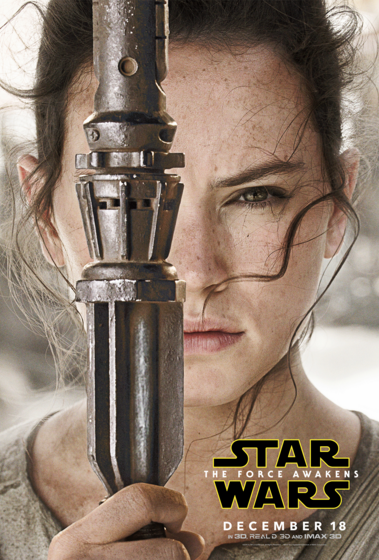 I took some time away from the maelstrom of frustration that has been much of the past few days in my head (doubtful any of that will ever see time here on the blog, at least not in any detail) and went to see Star Wars: TFA again tonight. Some podcasters I’d heard swore up and down that upon second viewing it seemed like a much better movie, and I found they were right. I’m not sure why. Is it just because, in the wake of the prequels, the first time around we were all wrapped in anxiety, hoping like hell that the film wouldn’t suck? Is it because we’ve come to expect disappointment from J.J. Abrams, so that’s what we were primed for initially? Or, more likely (at least for me), after the first time around we could let go of any anticipation of seeing the old Star Wars gang again and allow the new characters to sweep us away?

Whatever the reasons, I enjoyed it more this time. My gripes remain—it still paints our old heroes as failures and incompetents, especially Luke Skywalker; the script loses its focus about two-thirds of the way in so we can have a big action sequence and blow up Death Star Mark III; the R2Deus ex Machina2 problem—but they’re more easily forgiven.

Here’s a Colbert bit I came across to fill out this Star Warsy post.

← Previous: A Public Service Announcement / Next: Reality Bites, But There is Fanfiction →