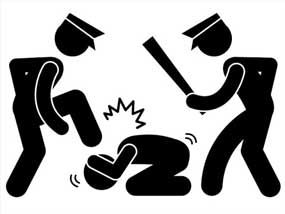 Why do we have police?

Seriously. I'm asking. Because right now it looks like they're part of the problem.

This weekend's protests against the kind of casual police violence and brutal behavior that we've all become somehow accustomed to were hijacked. By anarchists, by agitator plants, by right-wing chaos agents, by people who just look for any excuse to break stuff and loot. But also by the police.

Thank god for pocket cameras and the internet. Those technological marvels allowed us to see and hear so many examples of police departments doubling down on the offenses that prompted people to protest them in the first place. Police firing gas and projectiles at bystanders, some while standing on their own front porch. Police shoving, kicking, and bludgeoning protesters. Police using their vehicles and horses to assault people. Police pepper-spraying people, targeting reporters with tear gas, and generally behaving like government-sanctioned thugs.

The reports from some towns where police joined the protests are heartening, I don't want to overlook those. But even here, in my city of Seattle that has what is supposed to be one of the more enlightened police forces among large American cities, the cops were out last night to "restore order" and in so doing escalated things to violence and pepper-sprayed and manhandled crowds indiscriminately, with more unprovoked violence today.

Seattle cop pretends to try and pass a protestor on his bike and runs into him from behind - then puts the protestor in a headlock. #Protests2020

Last night I watched Seattle police officers victimize and brutalize countless peaceful protesters. With my own eyes. I stood toe to toe with the officers who I have likely walked past in the precinct. Toe to toe people who likely work under my own father.

Obviously, we need some sort of public safety agency. We are, in theory anyway, a culture based upon law and a social contract that requires those laws to be enforced somehow. Those laws are sometimes flawed—horribly so in too many cases—but makeup and details of the laws in general are a different matter than how the police operate. If the police are simply there to enforce the laws, then why are they permitted to break said laws?

I'm a straight white guy that has never had any sort of serious run-in with the police. When I got pulled over by traffic cop for the ridiculous offense of driving below the speed limit on an empty freeway late at night, I didn't fear for my safety. I have never even been in the vicinity when a cop has drawn a weapon. My personal experiences are not difficult in this manner. Nevertheless, I no longer trust the police even to the degree I did before this week, which was not as much as you might think, because I have to be suspicious of their tendency to use violence as a first resort in any given circumstance.

This was in Seattle, his partner had to physically move the knee off the guys neck #riots2020 #GeorgeFloydProtests pic.twitter.com/7zd94oZpqd

The history of how police forces came to be is not pretty. Police forces were formed to shield the wealthy from the rabble, to be a power arm of slaveholders, to be protectors of property. Theoretically, the rationale for police has evolved over time to "protect and serve" the public interest generally, to be agents of the law in broader terms as a way to keep people safe as well as to prevent theft and vandalism and the like. Yet, what we saw last night, what has happened many times before during civil unrest—this is, after all, the anniversary of the Tulsa massacre—was police forces in cities across the nation violently and indiscriminately clearing streets and otherwise wreaking their own havoc to protect property. Few if any police appeared to be doing anything to protect people, to promote public safety, to even apprehend criminals.

"But the police needed to restore order!" you might say. Well, (a) that regular order includes the sort of thing that prompted the protests in the first place, so there's that; (b) was that really the way to clam things down, by escalating to the point of chaos?

I get it, things can get a little crazy when the looters and vandals get involved. Those agitators used the protest crowds as cover for their criminality. But that wasn't the sequence of events in some cases, in some cases the police were the cause of craziness, provoking the start of something where those looters and vandals could have the cover they needed. Once that sort of chaos is happening, I don't know what alternative I'd suggest for handling it. But let's not actually create the chaos first, OK?

Police culture is steeped in violence. Police are trained to assume any interaction with a civilian can become deadly. Nuance is not a concern. Perhaps more importantly, police are likewise trained to revere and protect each other regardless of circumstance. Just look at the scene in Minneapolis that sparked this mess: One officer did the actual murdering of George Floyd, several others aided and abetted, and one looked on without taking any action. One might assume that the onlooker wasn't on board with murdering Mr. Floyd, but did he act to stop or in any way oppose his fellow policeman's behavior? Why not? If he witnessed a civilian doing anything remotely like that he would likely have been all over it, but this was a fellow cop, so he did nothing. (Yes, that's a supposition, I'm giving the guy the benefit of the doubt when he may have, in fact, been just as cruel and indifferent to snuffing out a black person's life.)

The purpose of the police force needs to be clarified. The tactics of the police force need to be focused away from the "force" part. The people that join the police need to be vetted to a far greater degree. And the police need to be policed, and a reformed police culture should welcome such oversight instead of resent it. Cops are not above the law. Individual cops who are out there making things worse for everyone should not be cops, and decent cops should be all in favor of weeding the bad cops out and keeping violent white-supremacist types and power-drunk asshats from becoming cops in the first place.

My reaction when seeing a police officer in even the most routine of circumstances is not reassurance or safety, it's apprehension and suspicion. I'm less apprehensive if the officer is black, but not a lot. Because I know police are violent. I know they will assume even the most trivial interaction can be a reason to use force. I know they are armed with lethal weaponry, and even if they opt for a taser instead of a pistol—not harmless, incidentally—they can be assumed to "subdue first, ask questions later."

The police need to change. Society needs to change them.

← Previous: Worse Before Better: Are We There Yet? / Next: Anxiety Today →