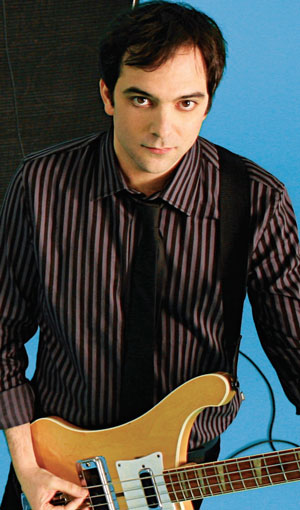 I don't know anyone personally that has COVID-19. At least, I don't think I do. But today the pandemic claimed someone I will certainly miss: Fountains of Wayne co-leader and songwriter Adam Schlesinger died from complications due to the coronavirus today.

Now, I'm not a big music guy. Most of my contemporaries are far more into bands and concerts and geeking out to nuances of different rock venues than I ever have been or ever will be. But Fountains was one band I actually went out of my way to see in person (and kind of regretted it, but not because of the music; the rock-club atmosphere and the amps kicked up to eleven so your ears bleed just make the whole experience kind of unpleasant even when Adam and Chris and co. were playing great tunes), which indicates how much their stuff speaks to me.

FoW hadn't had a new album in five years or so, and they had officially "disbanded" since, what with Schlesinger finding all kinds of time-consuming Hollywood work—writing songs for film and TV, producing other bands' albums—and co-leader Chris Collingwood experimenting with solo work (Look Park), but it's not like Yoko broke up the band, there was plenty of hope for more. Alas.

Schlesinger's songs are breezy, fun, melancholy, peppy, clever, poignant. Some Fountains albums are better than others, but none of them are poor. They all have good variety in them and just ooze talent. I enjoyed some of the songs he wrote for the TV musical "Crazy Ex-Girlfriend," which I probably never would have checked out if not for his involvement (it was an OK show), and the Tom Hanks movie "That Thing You Do." But to me he was at his best paired with Collingwood in the band they named after a lawn-ornament shop in Wayne, New Jersey.

Schlesinger lyrics are their own form of poetry. Songs about unrequited or broken loves ("Pining away every hour in your room / Rolling with the motion, waiting til it's opportune / Sitting there watching time fly past you / Why do tomorrow / What you could never do?"), the suburban proliferation of outlet malls ("God forgive the passengers if we should fail / To find a penny fountain or a half-off sale / I need a merchant / I just started searching for a Holy Grail"), staying behind in your hometown while someone else succeeds elsewhere ("I see your face in the strangest places / Movies and magazines / I saw you talkin' to Christopher Walken / On my TV screen"), toiling away in a dull job ("Working all day for a mean little guy / With a bad toupee and a soup-stained tie / He's got me running 'round the office / Like a gerbil on a wheel / He can tell me what to do / But he can't tell me what to feel"), the monotony of a tour ("Seatbacks and traytables please / Suddenly I can't feel my knees / Second-run movies / In-flight shopping magazines / Wheezing the air up there / Got me a backache somewhere / Is that Santa Barbara? I think I've I been there").

And, of course, my two very favorite Christmas songs: "I Want an Alien for Christmas"  and "The Man in the Santa Suit" ("How Jimmy's grown this year / says 'Mommy, quick come here' / 'Santa's sweaty and he smells like beer'").

If you're unfamiliar, Spotify has most of FoW's music. Please to enjoy.

Safe journey, Adam Schlesinger. We will metaphorically shoot the sky full of holes for you.